When I first started working at The Hornbeam Cafe in Walthamstow, I was amazed by the quality of the produce we received from OrganicLea. You’ll find their growing site in deepest Chingford from which they supply their lovely produce to several restaurants – as well as running a veg box scheme within London. What amazes me is not only does this food have an insanely low carbon footprint, it is also fully organic – and grown in London of all places! As a vegan, nothing pleases me more than knowing I’m using proper organic seasonal produce which,?by just hopping on a bus, I can see growing with my own two eyes.

I want to shout out to the whole world about OrganicLea so what better way than to promote it through a recipe I have developed using their produce?

What Ingredient to Choose?

With so much to choose from, my first dilemma was picking one item of their heavenly fruit or veg to work with. I soon solved this conundrum by looking at what the customers were loving and realising that my rhubarb dishes never last long on the shelves.

When the season of spring arrives my mood lifts and so does my appetite for light fruity desserts. It’s all too easy to just bung rhubarb into a crumble and serve it with lashings of hot custard – but that’s not my idea of spring! 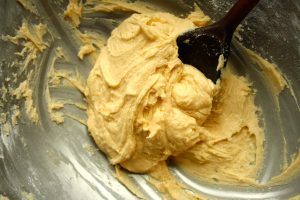 Have you heard of the magical creation that is the ‘crumble cake’? Well, until very recently, neither had I. But, boy, does it fit perfectly with the change in season. A light fluffy sponge, a crispy crumble topping, little bite-size pieces of fresh, fragrant rhubarb smothered in the creaminess of a custard icing. Come on, what more could you want?! You can thank me later…

Now, with the recipe decided on, it was time for me to visit the OrganicLea growing site.

Off to OrganicLea, Chingford!

The journey is much quicker than you’d expect. I thought I would be heading out into deep countryside but, instead, I found myself in a lightly wooded suburb in London’s Zone 5. Hidden away within a housing estate, I soon came across an area of greenery which welcomed me into OrganicLea.

I was astonished. It was nothing like I’d expected. An organic grower’s haven secretly tucked away in a big, bustling city.

It was incredible walking around the site and seeing the great variety of vegetables and fruits they had. Best of all, after spending a few weeks developing the recipe for this post, I loved seeing the rhubarb I wanted to use growing in the fields. It made me incredibly proud to be using OrganicLea’s produce in the recipe I have developed below for you guys!

From Plant to Cake… 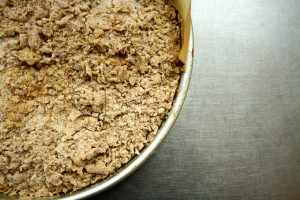 Lockdown adventures with Coco Back in March, my l

Dreaming of sunnier days and vegan ice cream With

Calling all chickpea lovers 🌿 Have you ever tr